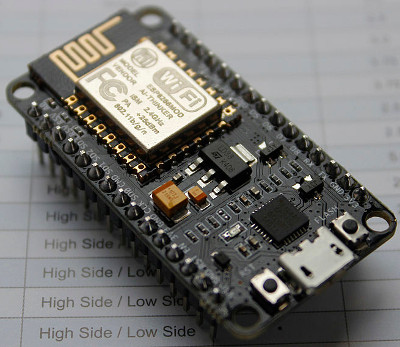 Read further to hear what I did.

The two immediate suspects are the power regulator, and the UART, as discussed in the forum here.

The first step is to target the power regulator. The AMS1117 LDO draws a quiescent current of “typically” 5mA. To prevent this, it may be sufficient to lift just pin 1. However, I chose to remove the whole chip to free up space for later.

You won’t need the LDO if you supply your own power directly to the 3.3V pin of the NodeMCU. I often use a single cell Li-Ion battery via a 1N4001 dropper diode. Note that from now on you will need to supply this power, even if a USB cable is connected for programming / monitoring.

Place a small amount of flux and solder on the pins, starting with the big tag, and it should lift easily. 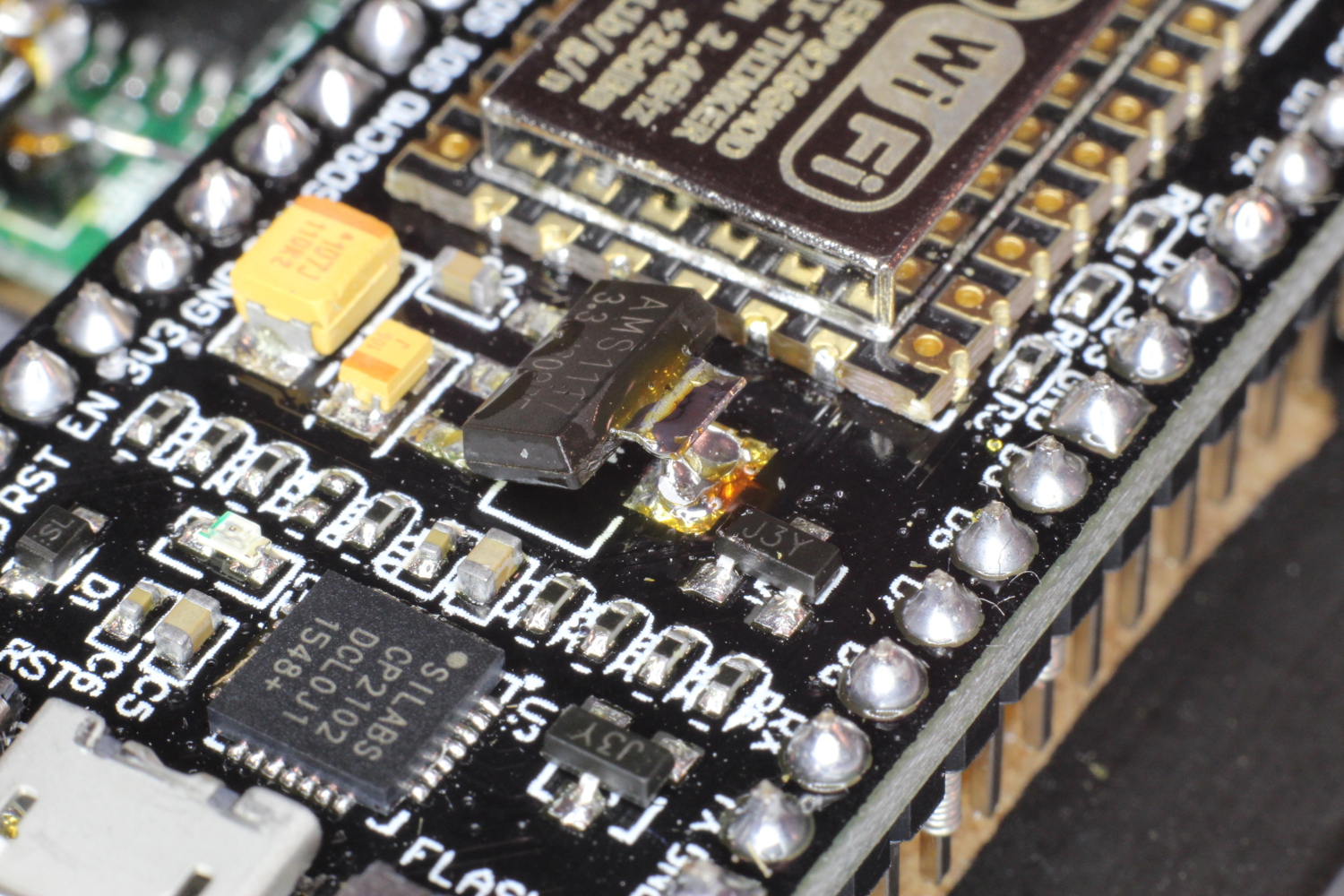 Then remove the remaining 3 pins. Without the LDO, I measured a saving of 3mA. 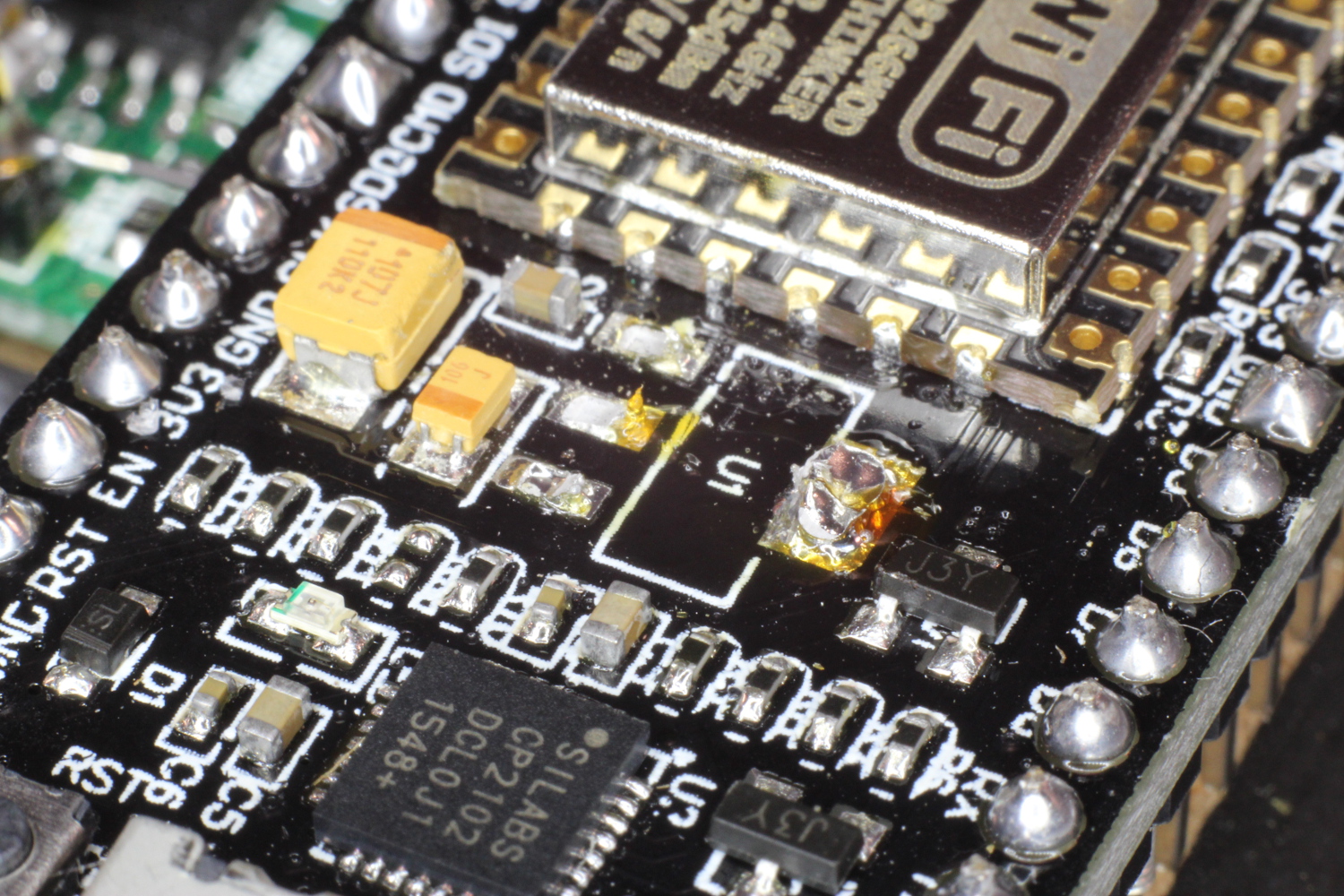 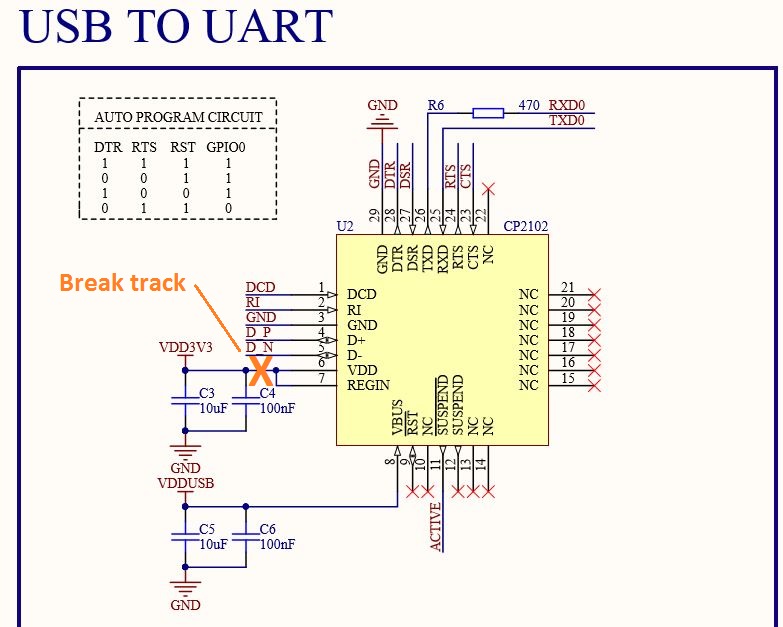 Now for the biggest saving – to disable the USB UART. This can be done with reference to the NodeMCU schematic by cutting power to pins 6 and 7.

In practice this means cutting a track with an X-Acto knife under the best magnification you can find, and with steady hands. Also scrape away the protective coating to the right side of the cut: 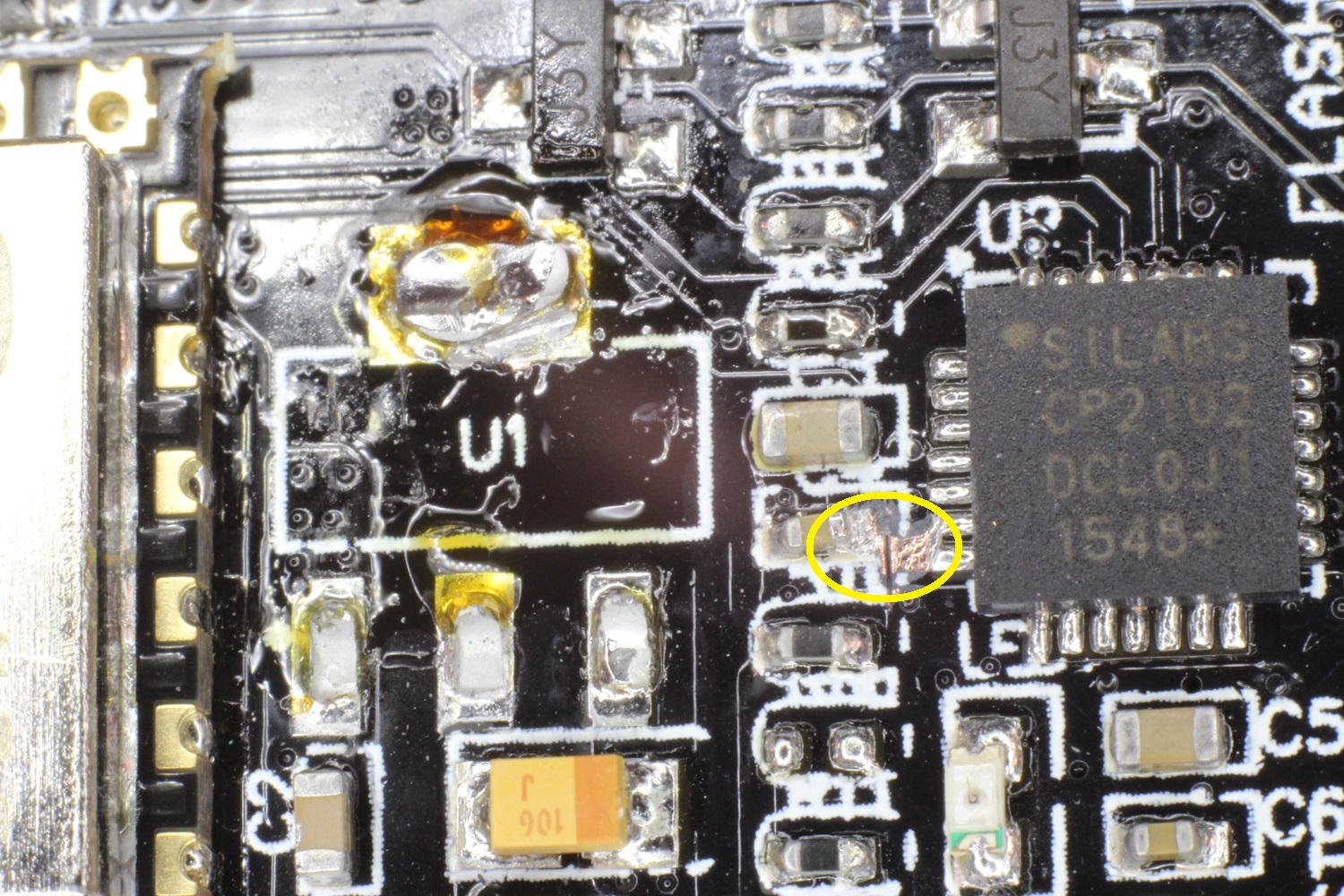 Congratulations! You will now have reduced power consumption by some 360x to around 20μA [Updated 28 Jan 2017 when I was powering only the NodeMCU, without additional circuitry].

Earlier I mentioned using OTA to program your device. If you have already installed the OTA code prior to cutting the track, in theory you could finish at this point, and permanently forego the use of the USB port. In real life, things go wrong, and it is useful to have the option of going back to having a serial port.

The first (and easier) option is to put a switch in the position formerly occupied by the regulator, attached to the two points shown below: 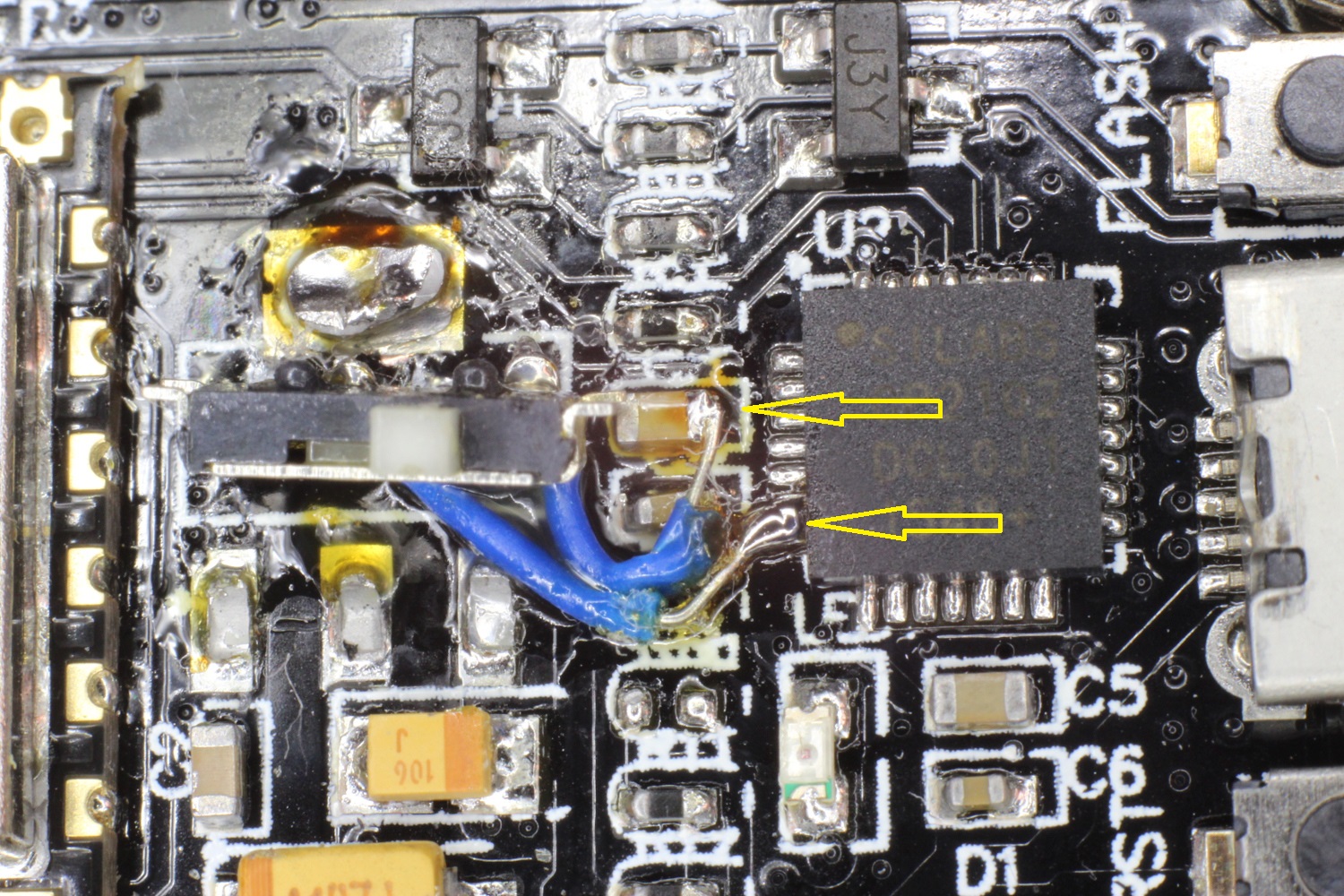 With this in place, you can re-enable the USB port for programming or debugging via the serial monitor.

A note to the unwary: The first time I tried this I glued down the switch with epoxy. The problem is that, unless you are more careful than I was,  a drop of epoxy becomes suddenly HUGE under these magnifications. The glue seeped into the switch, preventing it from working, and the NodeMCU ended up in the bin. Second time around I used super glue with more success.

[Update 4 Sep 2016]: I have replaced the switch with a simpler and more reliable solution: a jumper. 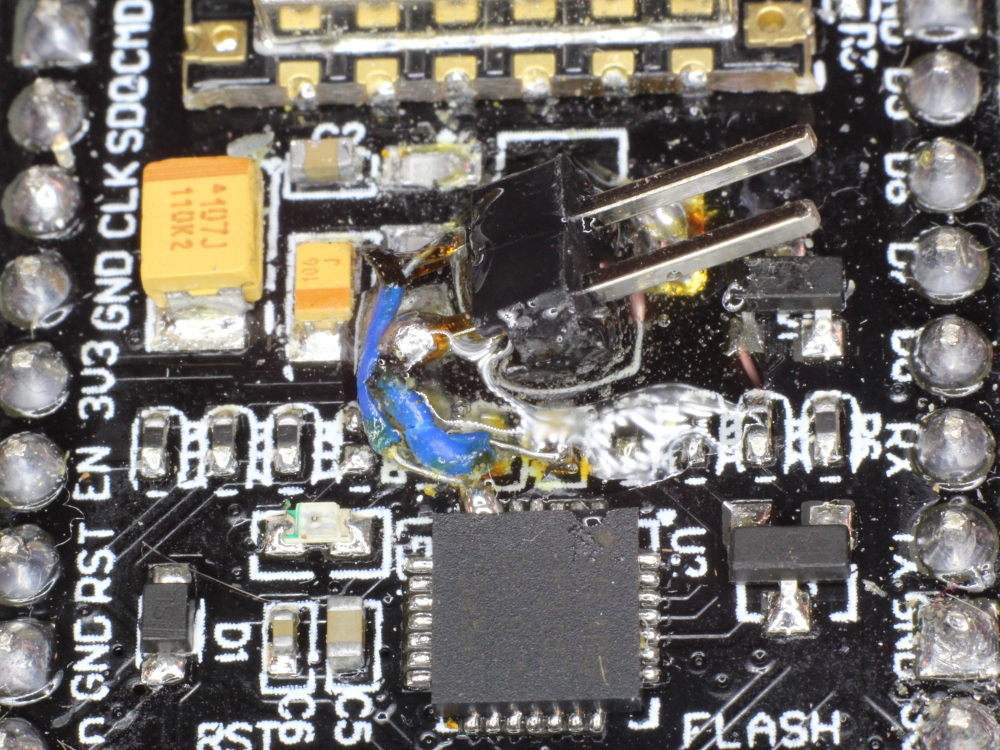 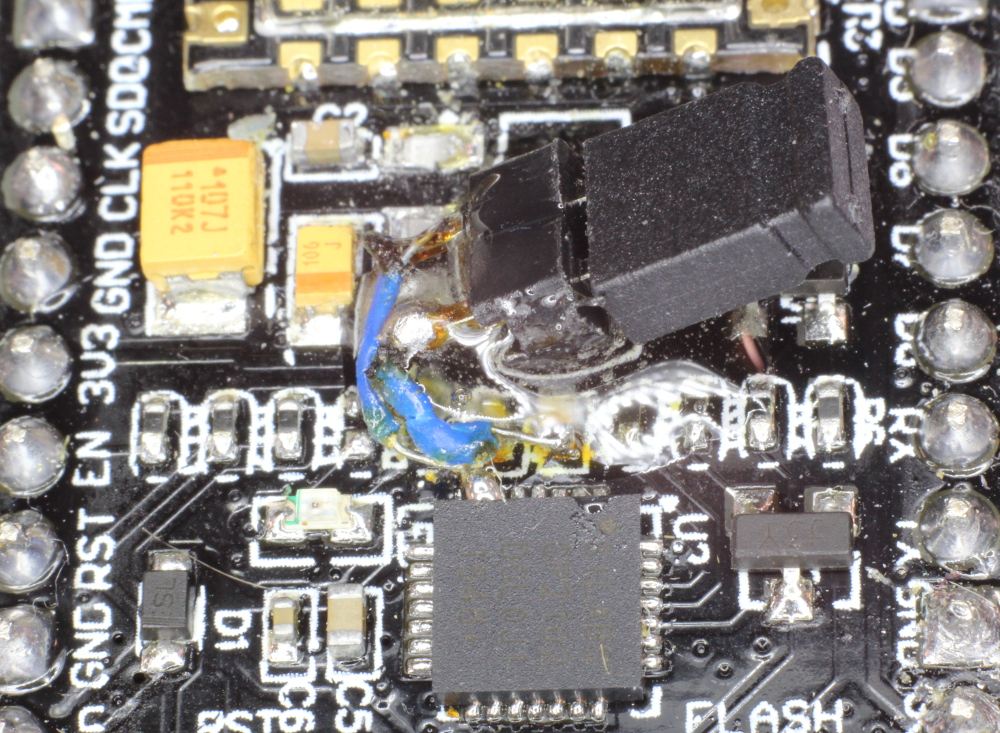 [Update 28 Jan 2017]: Thanks to Willem Jansen for suggesting this approach in the comments below. It turns out that the cp2102 UART has its own internal 5V to 3.3V regulator, which is not by default used by the NodeMCU circuitry, probably because it would not reliably supply the peak currents required by the ESP8266 (plus any associated circuitry the user might add around the NodeMCU). 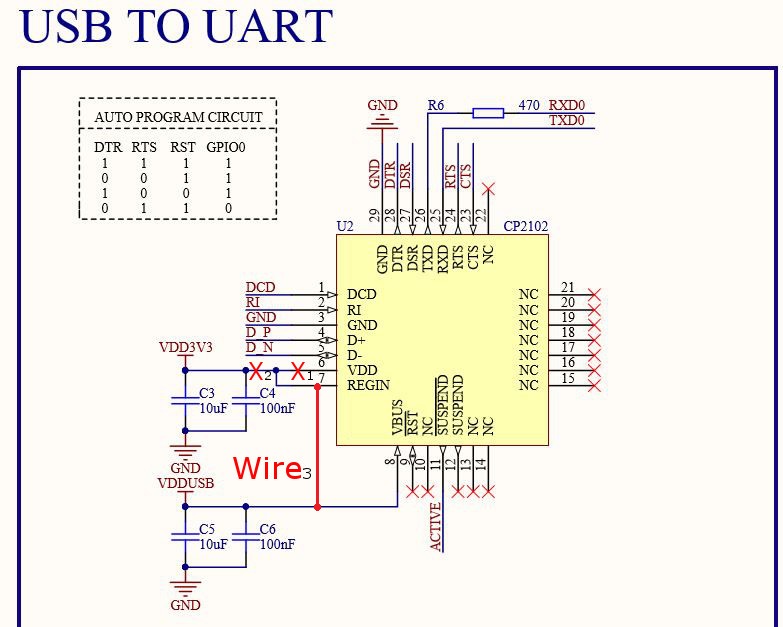 As explained in section 10 of the cp2102 datasheet, the cp2102 can be “configured as either a USB bus-powered device or a USB self-powered device”. To reconfigure the chip to use USB power requires isolating the VDD pin  (break at X1) in addition to the X2 break described earlier, followed by permanently wiring the Regin pin to USB 5V (Wire3). 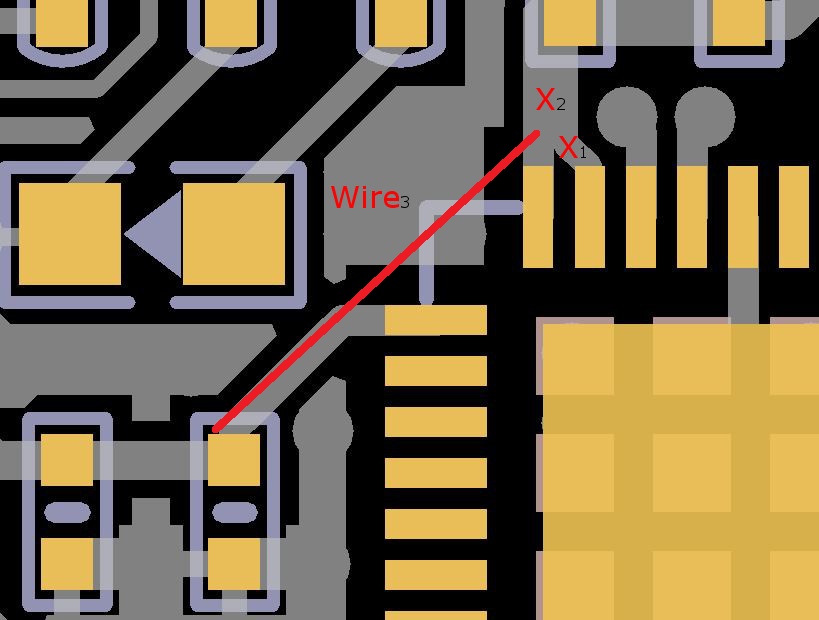 You can see on the right what this looks like. The extra PCB break really adds to the difficulty, even under 10X magnification. 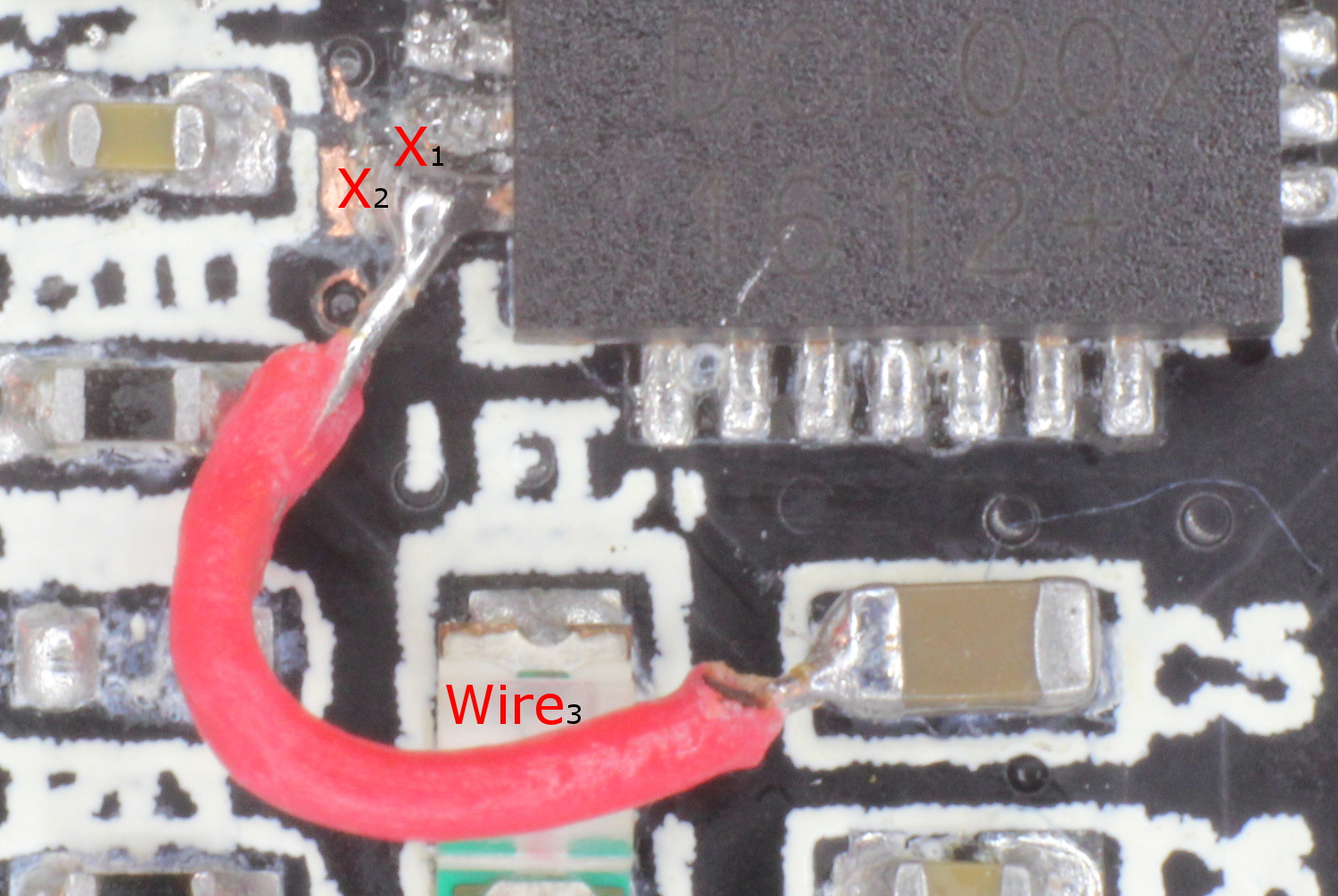 Once complete, the UART will only draw power when the USB is connected for programming / debugging. Certainly this is a more elegant solution and convenient to use –  offset by the extra time and effort required to make the mod. Depending on how often you plan to update firmware or debug will determine which approach is optimal – you decide!

. Thanks to Mario Valentino – in the comments below – who found that a disconnected UART can pull the ESP8266 TX pin low, causing intermittent booting problems (as hinted  at under “Desired level during power on” in: http://microchip.ua/esp8266/ESP8266_Module%20Application%20Design%20Guide.pdf). What I find strange is that in theory this should also be the case for option 1, yet I did not experience that. 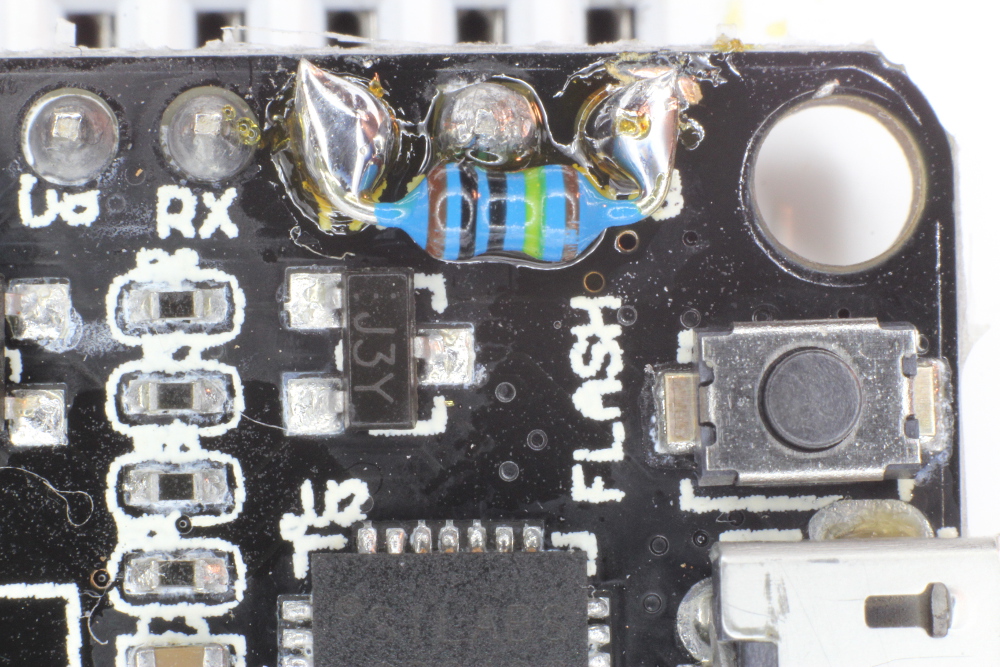 The solution is to place a resistor between TX and 3.3v, as shown on the right. Unfortunately this does waste some power. Choosing 1MΩ minimises this to an additional 3uA, bringing the total deep sleep current consumption of the NodeMCU to between 22-23μA.

Which option would I choose? I favour option 1. You save 5% power compared to option 2, and it is less tricky to make the mod. If you use OTA to update your firmware (or seldom update your firmware), you will not very often, if at all, need to replace the jumper to re-enable the serial port. Certainly, however, option 1 is not as “elegant”…

To be able to measure the small currents, I made use of the excellent μCurrent Gold.

You may correctly point out that 50μA is still several times higher than what should be achievable with just the ESP8266 alone. But for what I am doing it is good enough: (theoretically at least you could get towards 10 000 hours from a small 500mAh  Li-Ion cell, depending of course on what you do during the wake up periods, and preferably only infrequently using Wi-Fi.

[Update 28 Jan 2017]: While testing option 2 above, I was powering only the NodeMCU (i.e. without the additional HX711 circuitry used previously). I measured deep sleep current at 20μA!

In my next post, I’ll put this into practice, with full code.